Well, another bank holiday weekend, another Man vs Hedge blog post. You'd surely expect such an update by now. This years is going to be slightly different, because this year it isn't all about Cortisol it is more about accepting that sometimes the right tools for the job make all the difference.

This year I didn't have any issue with energy crashes, Cortisol lows or any of that nonsense. I adjusted my dosing appropriately so although I didn't take any extra during the day, but I did split my dosing differently and spread it through the day in smaller regular doses. In that respect, preparation and accepting that a change in dosing WOULD be necessary (not "might" be necessary, or "lets see how it goes"). Accepting that made life a whole lot easier.

But what made the whole task SO much easier this year was the use of a better ladder and a better hedge trimming device. Sadly Deb's dad passed away earlier this year, but he had a battery powered extendable hedge trimmer. We have our own corded electric hedge trimmer which never worked on our hedge, it made a right mess of it. So for years I used manual hedge shears as they did a much better job, I didn't expect any electric trimmer to be up to the job, conifer hedge seemed to immediately blunt our trimmer. But for whatever reason, I tried the 'new' hedge trimmer out and it was like a hot knife through butter, it was a complete revelation. Plus there was no trailing lead to a) have to plug in and get in the way and b) Deb didn't have to worry about me cutting through the power lead (I never worried about cutting through it obviously). Tools for the job pictured below: 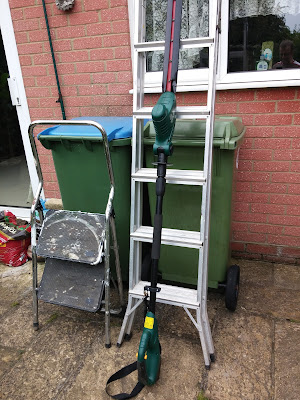 I tried the new trimmer out just to see how it would fare, and rather than just "try it out" I ended up trimming about 40ft of the hedge so quickly it was amazing. So when it came to the bank holiday weekend just gone I managed to completely do all of the side and top of the hedge over 2 days. I did get a bit wet as it rained on the Saturday, but never mind. This also included a huge amount of next doors brambles which were becoming very invasive so I was really useful to be able to hack through them with the long hedge trimmer without needing to be too close and get tangled up in the thorns.

So I think the hedge is finally conquered and with the right tools it will be much easier to manage now. It might sound weird, but I have enjoyed my battles with the hedge over the years, but being able to just buzz straight through the growth is so much easier, particularly across the top - the top is probably 6 foot across, so only being 5 foot 6 tall and the hedge being around 7 foot tall it is normally quite a reach.

So maybe the last Man vs Hedge update? We'll see :-)

I have an Endocrinology appointment tomorrow, just a checkup to make sure everything is ticking along fine. I've had some blood tests and an MRI scan, so should get the results of those. I'm not expecting anything but good news, but may post a quick update later in the week.
Posted by Carl Hall at 19:57